The Otway Basin is an onshore and offshore basin which extends approximately 500 kilometres from Cape Jaffa in South Australia to north-west Tasmania.

In Victoria, Beach’s operations in the Otway Basin involve natural gas production from the Halladale and Speculant natural gas fields, as well as the Geographe and Thylacine gas fields, with natural gas being piped and processed at the Otway Gas Plant near Port Campbell.

Once processed, the gas is sold to retailers who use it for domestic or commercial consumption in the East Coast gas market. 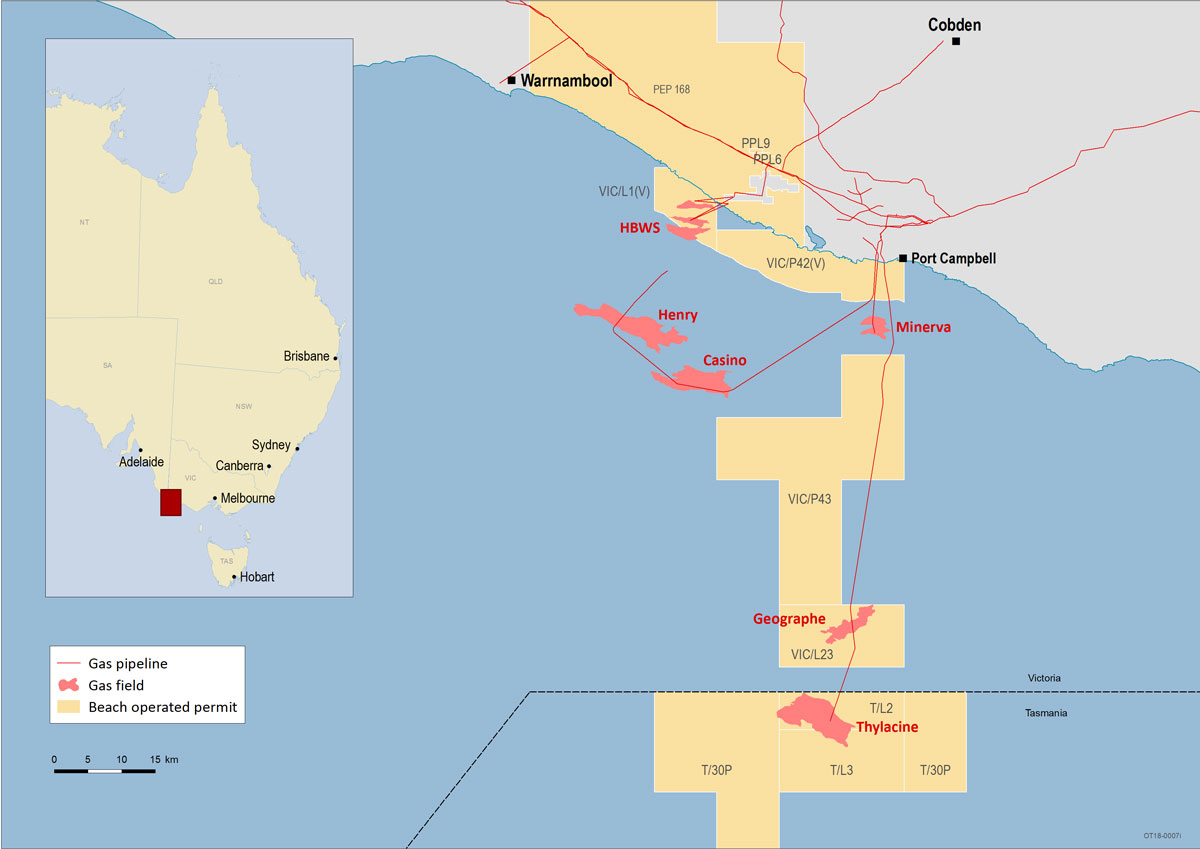 Natural gas from the Geographe and Thylacine offshore production wells is being piped and processed at the Otway Gas Plant near Port Campbell.

The first successful extraction of gas from the Halladale, Black Watch and Speculant Project was completed in August 2016.

The Halladale 1 and Speculant 1 and 2 wells are now in the production phase with the raw gas flowing from the well heads, through 33km of buried pipeline, to the Otway Gas Plant for processing.

Planning is now underway for the Black Watch well, with drilling due to begin in 2019.

Stakeholder consultation is an important part of preparing the project’s  Environment Plan as it helps identify local issues and concerns and ensures our planning manages potential impacts.

Beach has commenced engagement with the commercial fishing sector and other stakeholders and is keen to hear from any community members who would like further information or have any questions about this project.

In addition to the seabed assessments for the Otway Offshore Project, Beach is also planning a seabed assessment within its T/30P permit. Download the information sheet by clicking the button below to learn more.

Drilling of the Black Watch well commenced in January 2020.

The Project will run over phases with different levels of activity, vehicle movements and people on site.

To find out more about the project, read the Black Watch information sheet.

The Enterprise Project is a program to develop additional offshore natural gas reservoirs in the Victorian Otway Basin. The potential reservoirs are located offshore, up to 3 nautical miles (5.55 km) from the coastline, while the well site will be located onshore near Port Campbell. If Beach determines that the exploration well is commercially viable, a pipeline will be constructed to flow the raw gas for processing at the nearby Otway Gas Plant, for supply to the Australian domestic gas market.

Stakeholder consultation is an important part of preparing the project’s Environment Management Plan as it helps identify local issues and concerns and ensures our planning manages potential impacts.

Beach has commenced engagement with local land holders and community
members and is keen to hear from any community members who would like further information or have any questions about this project. Download the information sheet by clicking the button below to learn more.

For more information on the Enterprise Pipeline, click the button below: 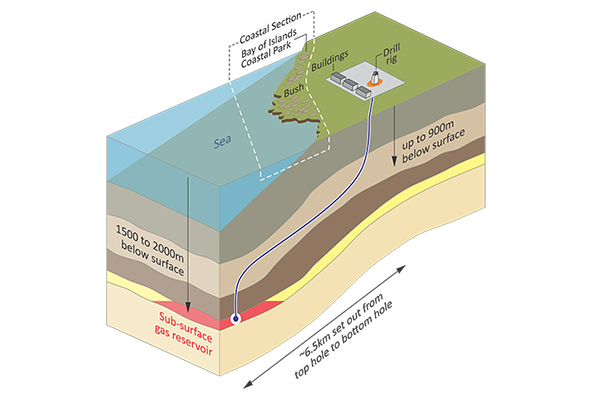 The Halladale, Black Watch and Speculant Project uses an ‘extended reach drilling’ method. This allows for offshore natural gas reservoirs to be accessed from an onshore well site.

This proven technology is safe, efficient, has minimal environment impact, and limits the visual impact by avoiding the need for an offshore drill rig.

This method involves drilling up to 2000 metres below the surface, while using directional drilling techniques to steer the well offshore, reaching a total drilling distance of around 6.5 kilometres to the potential gas reservoirs under the seabed.

The Otway Gas Plant is a major contributor to Victoria’s gas market. The gas plant is licensed as a Major Hazard Facility in accordance with the Victorian Occupational Health and Safety Regulations and is required to have a Safety Case in place. The Safety Case is assessed by WorkSafe Victoria and provides the basis for the facility licensing decision. This document presents a summary of the Otway Gas Plant Safety Case and is provided to the local community and municipal councils in accordance with the requirements of the Victorian OH&S Regulations. 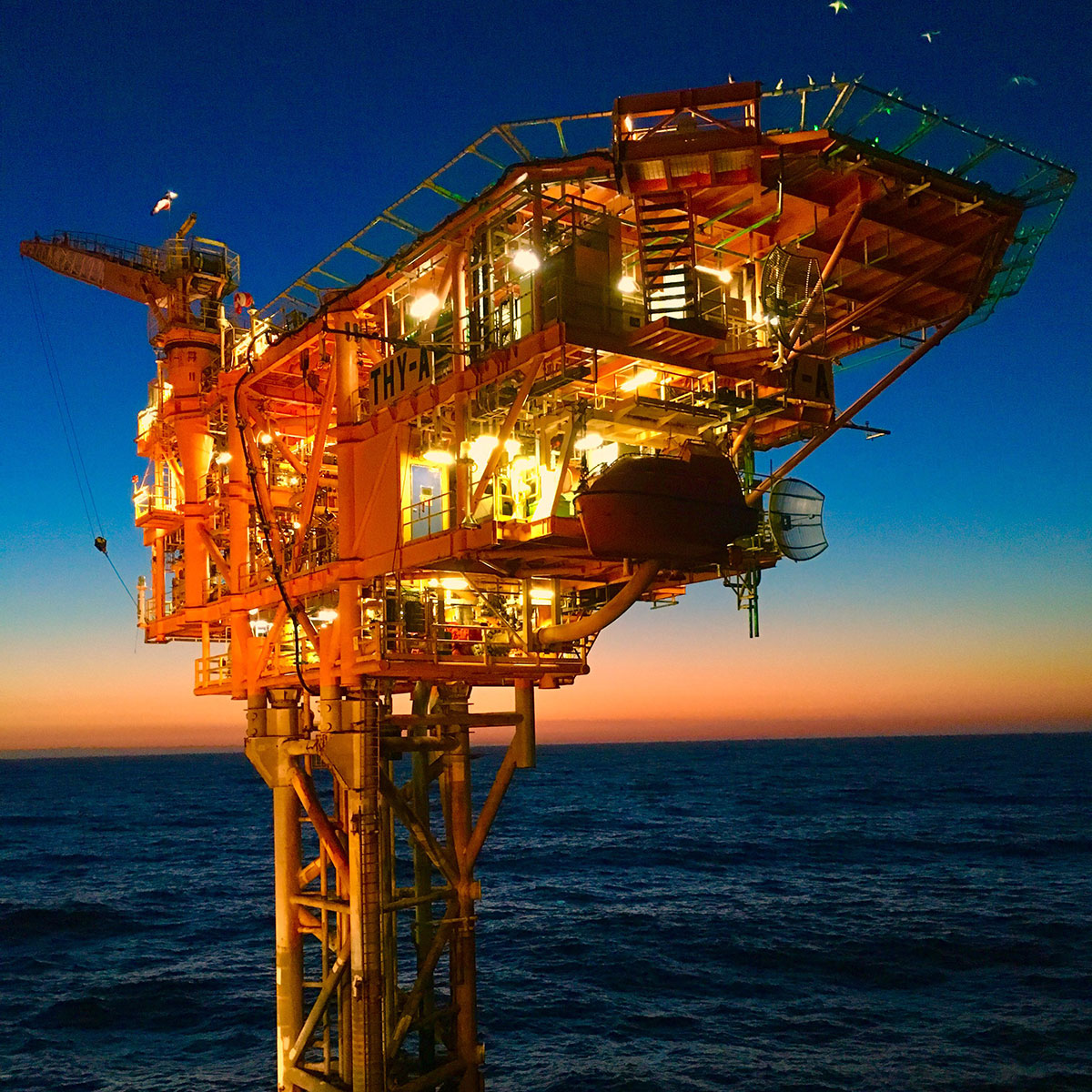 GEOLOGY OF THE OTWAY BASIN

The Otway basin was formed by multi-stage rift-sag and inversion phases. Late Jurassic to Early Cretaceous rifting resulted in the east-west trending Inner Otway Basin. Late Cretaceous rifting, culminating in continental breakup in the Maastrichtian, produced northwest-southeast trending depocentres beneath the outer shelf and slope. Multiple phases of compression in the Cretaceous-Recent resulted in inversion and wrenching of pre-existing structures.

The basin contains five major depocentres, the mainly onshore Inner Otway Basin, the offshore Morum, Nelson and Hunter Sub-basins and eastern Torquay Sub-basin. The Latest Jurassic-Early Cretaceous Otway Supergroup comprises up to 8km of continental and fluvio-lacustrine sediments that accumulated in grabens and half-grabens of the first rifting event.

Coastal-plain, deltaic and marine sediments of the Late Cretaceous Sherbrook Group are up to 5km thick. The Paleocene-middle Eocene Wangerrip Group sediments were deposited in coastal plain, deltaic and inner shelf settings and are separated from the open marine, mixed carbonates/siliciclastics of the Eocene-Miocene Nirrandra and Heytesbury groups, by a major unconformity.

The main exploration targets in the Otway Basin are the Waarre Sandstone at the base of the Sherbrook Group and sandstones of the Pretty Hill Formation and Katnook Sandstone/Windermere Sandstone Member in the Early Cretaceous section. The main source rocks occur in the Early Cretaceous section. Regional and intraformational seals exist in the Pretty Hill, Laira, Eumeralla and Flaxman formations, the Belfast, Skull Creek and Pember mudstones and mudstones and marls of the Wangerrip, Nirrandra and Heytesbury groups. Play types include faulted anticlines, large anticlinal features and tilted fault blocks.

For more information on the petroleum industry regulatory processes in Victoria please visit:

To register interest in tendering for key goods and services for the Otway Offshore program, visit the following link: